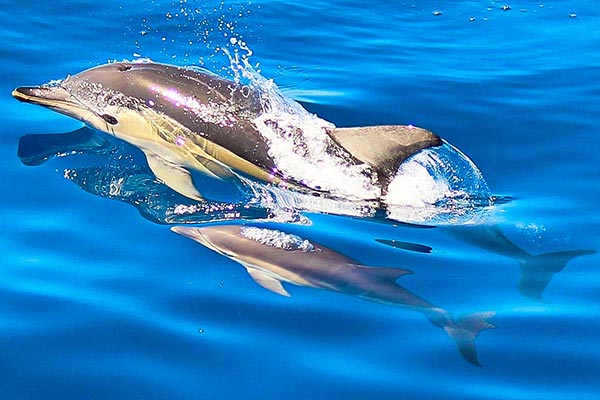 Delphinus delphis / Delphinus capensis (Linnaeus, 1758)
This is the least common Dolphin found in Marlborough! Common dolphins found in New Zealand waters belong to the species now known as the short-beaked common dolphin. The colouration of this dolphin is very distinctive with a criss-cross or hour-glass type pattern centred on the flanks. Colours include purplish black, grey, white and yellowish tan. The dorsal fin is high with a concave hind edge. The head is low and smooth-sloping.

The common dolphin (Delphinus delphis) is found in offshore warm-temperate waters in the Atlantic and Pacific and is the most numerous dolphin within this range. It is closely related to the long-beaked common dolphin (Delphinus capensis) which prefers shallower and warmer water. Short-beaked common dolphins are found in waters throughout New Zealand and Australia. In New Zealand, this species tends to remain a few kilometres from the coast and is particularly common in the Hauraki Gulf and off Northland.

Common dolphins may form enormous schools of several thousand individuals. They are also known to associate with schools of pilot whales and other dolphin species such as dusky dolphins. This species is abundant but precise population estimates are largely unknown.

Common dolphins feed on a variety of prey, including surface schooling fish species and small mid-water fish and squids. They are known to dive to depths of 280 metres in search of prey and hunt cooperatively within schools. Dives can last up to 8 minutes but are usually between 10 seconds and 2 minutes. These animals are vocal and show a wide range of acrobatic behaviour.

Gestation lasts for around 10-11 months and the calving interval varies from 1 to 3 years. Age at sexual maturity is estimated to vary with region but for the Pacific is thought to range from 7-12 years for males and 6-7 years for females. Maximum age is estimated to be 22 years.

Killer whales are the principal predators of common dolphins. When under threat individuals can be seen moving closer together. Dolphins have also been spotted with shark-bite scars indicating that sharks may predate on this species.