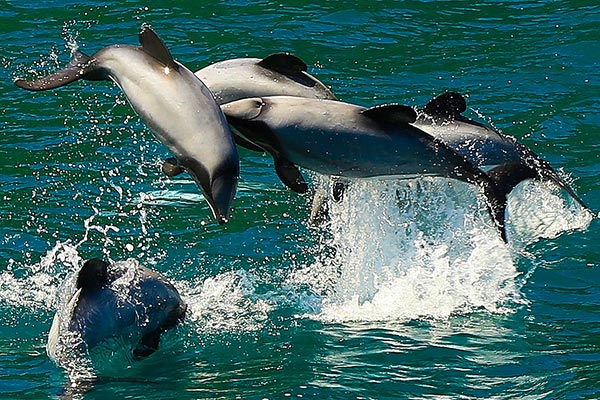 Cephalorhynchus hectori (Van Beneden, 1881)
One of the smallest marine dolphins in the world, Hector’s dolphins grow no more than 1.5 m in length. Only found in New Zealand’s waters, this distinctive grey dolphin with black and white markings and a round dorsal fin is the most easily recognised species of dolphin in New Zealand. Hector’s and Māui dolphin are known to Māori by other names, including tutumairekurai, aihe, papakanua, upokohue, tukuperu, tūpoupou, pahu, pōpoto and hopuhopu.

They are the only dolphins in New Zealand with a rounded black dorsal fin. Their bodies are a distinctive grey, with white and black markings and a short snout. Adult South Island Hector’s dolphins don’t often exceed 1.5 m in length and weigh between 40 and 60 kg. Males are slightly smaller and lighter than females.

Where are they found?

Hector’s dolphins are found around the coast of the South Island but distribution is patchy. Populations are concentrated between Haast and Farewell Spit in the west, around Banks Peninsula in the east, and Te Waewae Bay and Porpoise Bay/Te Whanaga Aihe in the south.

Dolphins and people have shared our coastal waters and bays for centuries. In recent years, there has been a worldwide increase in awareness of marine mammals and a greater desire to protect them. Set net fishing poses a major threat to Hector’s and Māui dolphin. Like all marine mammals they need to come to the surface regularly to breathe. If they become tangled in set nets, they will hold their breath until they suffocate. Because these dolphins occur close inshore, often in bays and harbours, they are at risk of being injured by boats. Newborn dolphins are particularly vulnerable as they swim relatively slowly, close to the surface. Some have been killed by boat propellers when unwary boaties have run them over.

Want to learn more about the Hector's dolphin?