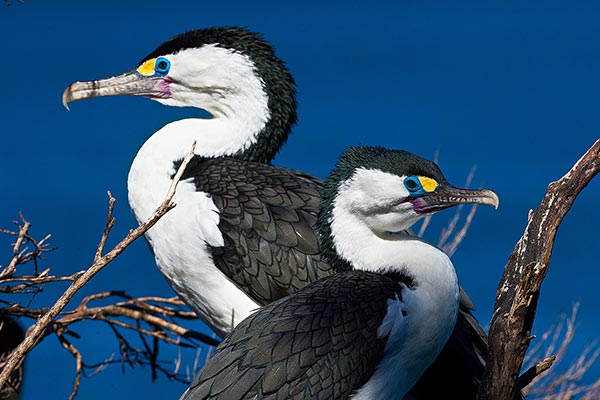 This large black-and-white shag is often seen individually or in small groups roosting on rocky headlands, trees or artificial structures. In regions where it occurs, it can usually be readily seen about harbours and estuaries associated with cities or towns. Unlike most other shag species, the pied shag is reasonably confiding, allowing close approach when roosting or nesting in trees. It generally forages alone, but occasionally in small groups when prey is abundant.

Pied shags mainly inhabit coastal habitats about much of New Zealand. Adults have the crown, back of the neck, mantle, rump, wings, thighs and tail black, although on close inspection the upper wing coverts are grey-black with a thin black border. The face, throat, sides of neck and underparts are white. The long, hooked beak is grey, the iris is green, and legs and feet black. On breeding adults, the skin in front of the eye is yellow, at the base of beak is pink or pink-red, and the eye-ring is blue. Non-breeding adults have paler skin colours than breeders. The upperparts of juveniles and immatures have dark and pale brown tones. Their underparts are white but with varying amounts of brown mottling, from almost entirely brown to little at all. The skin in front of eye is pale yellow, at the base of the beak is grey – pale pink, and eye-ring is grey.

Voice: generally silent away from nesting colonies, but quite vocal at colonies during pair formation, nest building and when one of a pair returns to nest during incubation. Females give wheezy haa calls, while males give a variety of loud calls, that may be repeated several times, and that sound like aark, kerlick and whee-eh-eh-eh.

Similar species: the pied morph of the little shag is much smaller and has a short stubby yellow beak. Both the king shag and pied morph of the Stewart Island shag have black heads with white throats, patches of white feathers on the upper wings, and pink feet. Juveniles and immatures of black shag can be difficult to distinguish from the similar-sized juveniles and immatures of pied shag. Both can have underparts from nearly all brown to nearly all white. Juvenile black shags have dark heads and upper throat, and have extensive yellowish facial skin about base of the beak, whereas the yellow is only in front of the eye on the pied shag.

While counts of pied shags, along with other coastal species, have been undertaken in a few areas (Wellington Harbour, Marlborough Sounds), no attempt has been made to carry out a national count of the species or the number of pairs at all colonies. However, the population in 2012 was estimated to number 1000-5000 mature individuals. An examination of numbers of pairs at colonies during three periods (pre 1980, 1980-1999, post 1999), suggests that populations in the northern North Island and southern South Island are in decline, while those in central New Zealand are increasing (M. Bell pers. comm.).

There are a variety of threats to pied shags. They were formerly occasionally shot by fishers who considered that they competed for fish; probably few pied shags are shot these days. Pied shags have drowned in craypots, set-nets and on inshore longlines. Some birds have been affected by oil spills, including following the grounding of the container ship Rena off Tauranga in October 2011. During the recent population expansion in central New Zealand, pied shags have established colonies in trees adjacent to peoples’ homes. The noise and smell of such colonies has resulted in a few nesting trees being felled. It is unknown whether changes in prey abundance as a result of commercial fishing or climate change, has impacted, positively or negatively, on the pied shag.

Pied shags mainly nest in trees along coastal cliffs, with a few colonies in trees in or about freshwater lakes near the coast. There is one inland colony known, on Lake Hakanoa, Huntly. Clutches are laid in all months, with peaks during February-April and August-October. Clutch size is typically 2-5 eggs, and both sexes share incubation and care of young. Chicks start flying at 7-8 weeks of age, and remain at or near the colony to be fed by their parents for a further 10-11 weeks. Nearly 80% of nesting attempts at Makara Beach, Wellington, were successful, with a mean of 1.4 fledglings per nest.

Adult pied shags appear to be sedentary, but some juveniles disperse widely. When resting during the day, birds occur on undisturbed beaches, shoreline rocks, trees and artificial structures. During the late afternoon or evening, pied shags return to nesting colonies or favoured roosts in trees near water for the night. They are generally a solitary forager, but occasionally small groups gather where prey is readily available. When swimming slowly at the surface, they use alternate feet, but when foraging underwater they use both feet at the same time for propulsion. Pied shags generally forage in water less than 10 m deep.